APhMS in the 21st Century

On November 6, 2014, the Applied Physics and Materials Science (APhMS) faculty, alumni, students, staff and corporate friends joined each other for a day of connections and discovery. The one day glimpse into the 21st Century featured faculty talks spanning quantum engineering to physical biology, a panel discussion on the future of alternative energy, poster sessions and lab tours. It closed with a banquet at the Athenaeum with keynote speaker, Dr. Arati Prabhakar, Director of DARPA (Defense Advanced Research Projects Agency) and Caltech Applied Physics alumna (M.S. '80, Ph.D. '85). 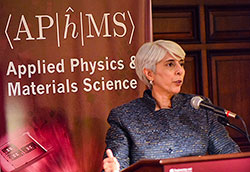 Dr. Prabhakar (MS '80, PhD '85) has spent her career investing in world-class engineers and scientists to create new technologies and businesses. Her first service to national security started in 1986 when she joined DARPA as a program manager. She initiated and managed programs in advanced semiconductor technology and flexible manufacturing, as well as demonstration projects to insert new semiconductor technologies into military systems. As the founding director of DARPA’s Microelectronics Technology Office, she led a team of program managers whose efforts spanned these areas, as well as optoelectronics, infrared imaging and nanoelectronics.

In 1993, President William Clinton appointed Dr. Prabhakar director of the National Institute of Standards and Technology, where she led the 3,000-person organization in its work with companies across multiple industries.

Dr. Prabhakar moved to Silicon Valley in 1997, first as chief technology officer and senior vice president at Raychem, and later vice president and then president of Interval Research. From 2001 to 2011, she was a partner with U.S. Venture Partners, an early-stage venture capital firm.

Dr. Prabhakar identified and served as a director for startup companies with the promise of significant growth. She worked with entrepreneurs in energy and efficiency technologies, components for consumer electronics, and semiconductor process and design technology.

Dr. Prabhakar received her Doctor of Philosophy in applied physics and Master of Science in electrical engineering from the California Institute of Technology. She received her Bachelor of Science in electrical engineering from Texas Tech University. She began her career as a Congressional Fellow at the Office of Technology Assessment.

Dr. Prabhakar has served in recent years on the National Academies' Science Technology and Economic Policy Board, the College of Engineering Advisory Board at the University of California, Berkeley, and the red team of DARPA's Defense Sciences Research Council. In addition, she chaired the Efficiency and Renewables Advisory Committee for the U.S. Department of Energy. Dr. Prabhakar is a Fellow of the Institute of Electrical and Electronics Engineers, a Texas Tech Distinguished Engineer, and a Caltech Distinguished alumna.